CalMAN Client3 is a calibration utility application that is used with CalMAN to help create and manage monitor calibration profiles on Windows and Mac computers. CalMAN Client3 is always installed on the same computer as the monitor to be calibrated. Both a Windows version and a Mac version of Client3 are available. 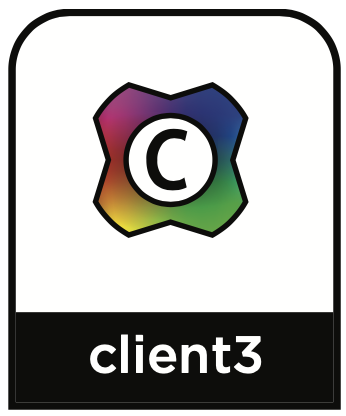 The primary use for Client 3 is calibrating RGB computer monitors that are normally driven from the standard graphics adapter on a Windows or Mac computer. The graphics adapter drives these monitors with a full range of RGB signal levels (0-255/8-bit; 0-1023/10-bit).

CalMAN calibrates RGB computer monitors by creating a 1D LUT grayscale ramp and an ICC color profile. It writes this calibration data to a selected monitor profile in the target computer’s operating system.

Another use for Client 3 is calibrating RGB monitors or projectors that are normally driven from the standard graphics adapter on a Windows or Mac computer, but that aren’t being calibrated by creating and saving a monitor profile to the computer operating system.

In this case, Client 3 will be used only as a CalMAN-controlled test pattern source, producing test patterns on the display under test as required. The operator might then make manual adjustments to the display or might use CalMAN to automatically create a calibration LUT.

CalMAN Client 3 cannot address monitors that are driven by a computer through a video output adapter. To calibrate one of these computer-driven video monitors, you will need an alternate test pattern source.

One alternate test pattern source could be SpectraCal VirtualForge software. VirtualForge runs on the target computer (Windows or Mac) and controls the AJA or Blackmagic video output adapter to produce reference level test patterns. CalMAN connects to VirtualForge over the local network to automatically switch test patterns as required.

Connecting CalMAN to Client3 CalMAN Client3 Installation You need to install Client 3 on each computer that has a laptop screen or one or more RGB monitors that you wish to calibrate that are driven from the computer’s standard graphics adapter. CalMAN Client3 Licensing Each Client 3 installation needs to be licensed to be able to connect to CalMAN for display control. No client license is required to use Client 3 only as a test pattern source. Client 3 licenses are authorized and dispensed through CalMAN the first time that CalMAN connects to an unlicensed Client 3 installation for display control.
Thanks for your message!
Thanks for your message!
×