Since the International Telecommunication Union (ITU) adopted BT.1886 as the recommended gamma function for flat panel displays used in HDTV studio production in 2011, some confusion has arisen over the usefulness of the function, as well as its application in the field.

As SpectraCal’s CalMAN 5.2 calibration software was the first to use BT.1886 as the default gamma target for Rec 709, this seems like an appropriate time to clear up any confusion as to the benefits of using BT.1886 when calibrating a reference display.

The following questions and answers are intended to describe the ways BT.1886 differs from its historical precedents, and the advantages it confers.

Also called the Electro-Optical Transfer Function (EOTF), gamma is a function that determines the transition of video signal from black to white. Gamma can also be defined as the algorithmic relationship between the input signal (the “electro”) and the amount of luminance displayed on screen (the “optical”).

Gamma functions are not linear. Calibration standards established when Cathode Ray Tubes (CRTs) were the industry norm are still used for the calibration of digital flat panels. Since digital flat panel displays do not intrinsically act like CRTs, a non-linear function must be applied to make them mimic the physical behavior of the older technology.

Over time, several functions have been specified for this purpose. Most of these formulas have a power function at their core, usually with an exponent in a range from 2.0 to 2.4.

BT.1886 is the recommended gamma for High Definition flat panel displays, determined and adopted by the International Telecommunications Union (ITU) in March of 2011.

A variety of gamma functions have been in use in the field, with no standard. Creating a single standard for gamma makes it easier to ensure that the same content is viewed the same way on every display.

BT.1886 is not valuable just because it is a standard, however. It offers several clear advantages over previous practice. First, BT.1886 more closely mimics the behavior of CRTs than previous power functions, and therefore better ensures consistent viewing on different display technologies.

How is BT.1886 different from previous gamma functions?

Previous gamma functions were based on a perfect black of zero luminance that few devices can actually achieve. Unlike these older functions, BT.1886 takes into account the performance of a device at its blackest level.

Previous gamma functions additionally do not adequately account for independent adjustment of brightness and contrast controls on a display.

How does BT.1886 make these improvements?

As SpectraCal’s Director of Software Development, Joel Barsotti, explains, “BT.1886 is like having the ability to slide the end-points (the display’s black and white levels) up and down the curve itself, so that the scale is preserved. This affords a greater amount of noticeable difference between points at the dark end of the curve.”

Can you show me that difference?

The following chart shows luminance on the Y-axis, plotted to a logarithmic scale. In this example, the yellow line shows BT.1886, and the gray line a 2.4 power function (the most widely used gamma formula previous to BT.1886). 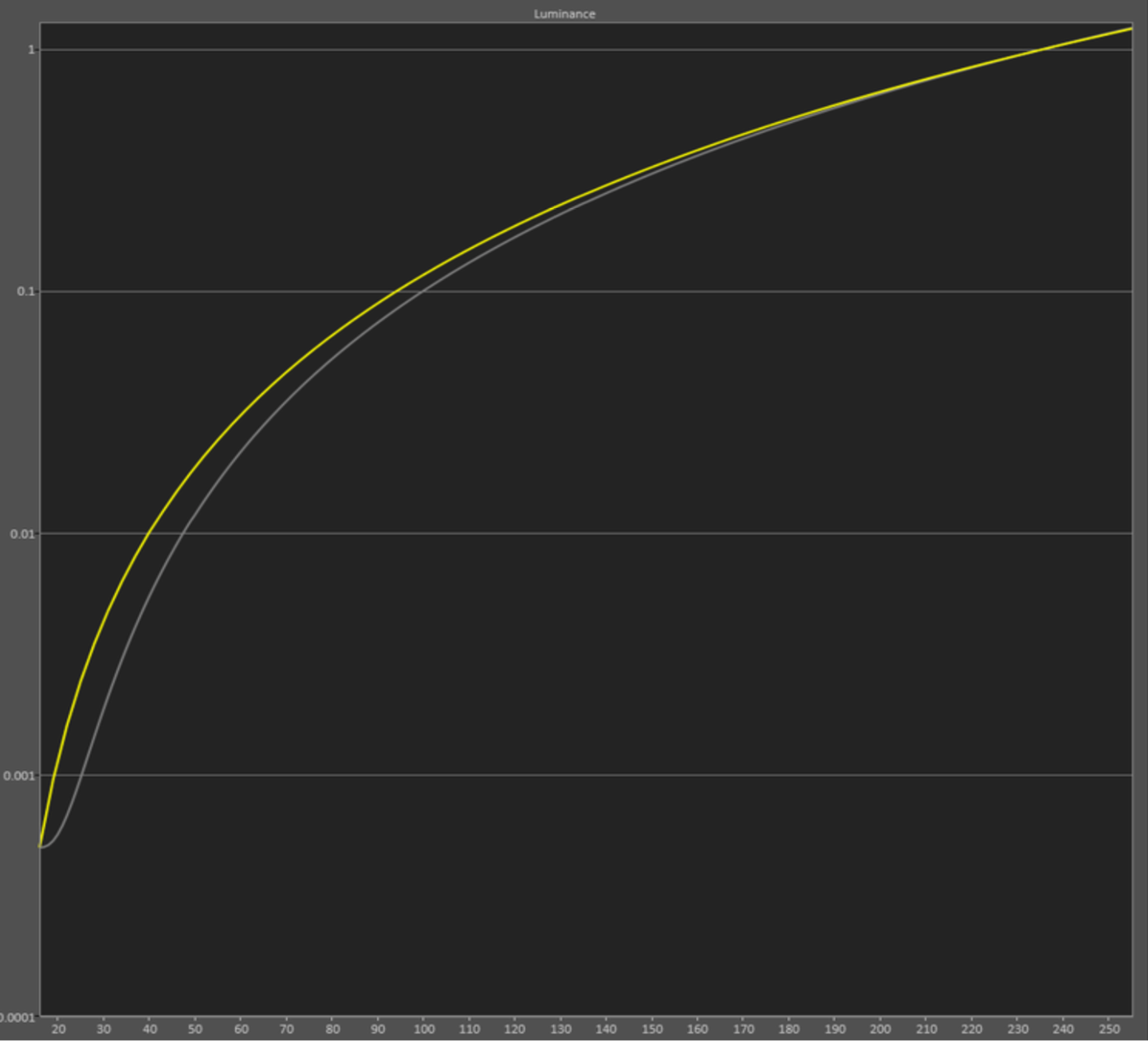 As you can see, BT.1886 makes little difference at the bright end of the gray scale, but it makes a substantial difference at the black end. Note how smooth and even the BT.1886 curve is, while the 2.4 power curve is kinked as it approaches black.

The bottom half of each rectangle in the sequence shows the BT1886 value, the top half the value displayed by the 2.4 power curve. Observe how BT.1886 eliminates clipping at the dark end of the scale.

Since version 5.2 of CalMAN software, BT.1886 has been the default gamma function for the Rec 709 colorspace standard.

BT.1886 is quickly being adopted in the field, particularly in the broadcast, production, and post-production industries.

For example, if you are targeting the Digital Cinema Initiative (DCI) colorspace definition, you should use the DCI gamma function.

What are the main advantages of using BT.1886?

BT.1886 creates a closer match between different video displays, so that the same video signal will appear more consistently on different displays.

Since BT.1886 has rapidly been adopted by content producers, setting your display to BT.1886 will also provide the best opportunity to view video content as it was originally produced.

Finally, BT.1886 will almost always provide clearer differentiation between the first few steps out of black.

Where can I learn more?

The ITU specification for BT.1886 is available at this link

Can't find what you're looking for? Get in touch
Thanks for your message!
We really appreciate your feedback and will get back to you as soon as possible.
×