With this issue, we bring you a new contributor, Dr. Raymond Soneira, a research scientist with a career that spans physics, computer science, and television system design. Dr. Soneira obtained his Ph.D. in Theoretical Physics from Princeton University, spent 5 years as a Long-Term Member of the world famous Institute for Advanced Study in Princeton, and another 5 years as a Principal Investigator in the Computer Systems Research Laboratory at AT&T Bell Laboratories. He is currently President of DisplayMate Technologies Corporation of Amherst, New Hampshire, which produces video calibration, evaluation, and diagnostic products for consumers, technicians, and manufacturers.

Dr. Soneira, who has authored over 35 research articles in scientific journals in physics and computer science, including Scientific American, frequently stages “shoot-outs” where he methodically documents the actual facts of video display performance – facts often at odds with conventional wisdom and marketing claims.

One recent display technology shoot-out provided the first public study of chromaticity variations with viewing angles. Dr. Soneira has graciously agreed to share these results with CalMAN users. Experienced calibrators have learned the hard way to be very careful with viewing angles, but Dr. Soneira’s research documents for the first time exactly how pronounced the angular effects can be.

Everyone knew there were viewing angle effects, but our side-by-side tests showed how incredibly large they actually are. The differences were amazing and astonished everyone that came to see and compare the HDTVs side-by-side, including industry experts, manufacturers, engineers, reviewers, journalists, and ISF instructors.

The eye is much more sensitive to reds and greens than blues, so we’ve picked a sample color with a mixture of 100% red and 50% green to measure and analyze, which is an orange color that has roughly equal luminance contributions from both red and green. The results are based on spectroradiometer measurements and presented in terms of MPCD Minimum Perceptible Color Difference or JNCD Just Noticeable Color Difference, where 1 MPCD = 1 JNCD = Δ(u’v’) = 0.0040 on the CIE 1976 Uniform Chromaticity Scale. Values less than 1 are visually indistinguishable, while values much greater than 1 are blatantly different. 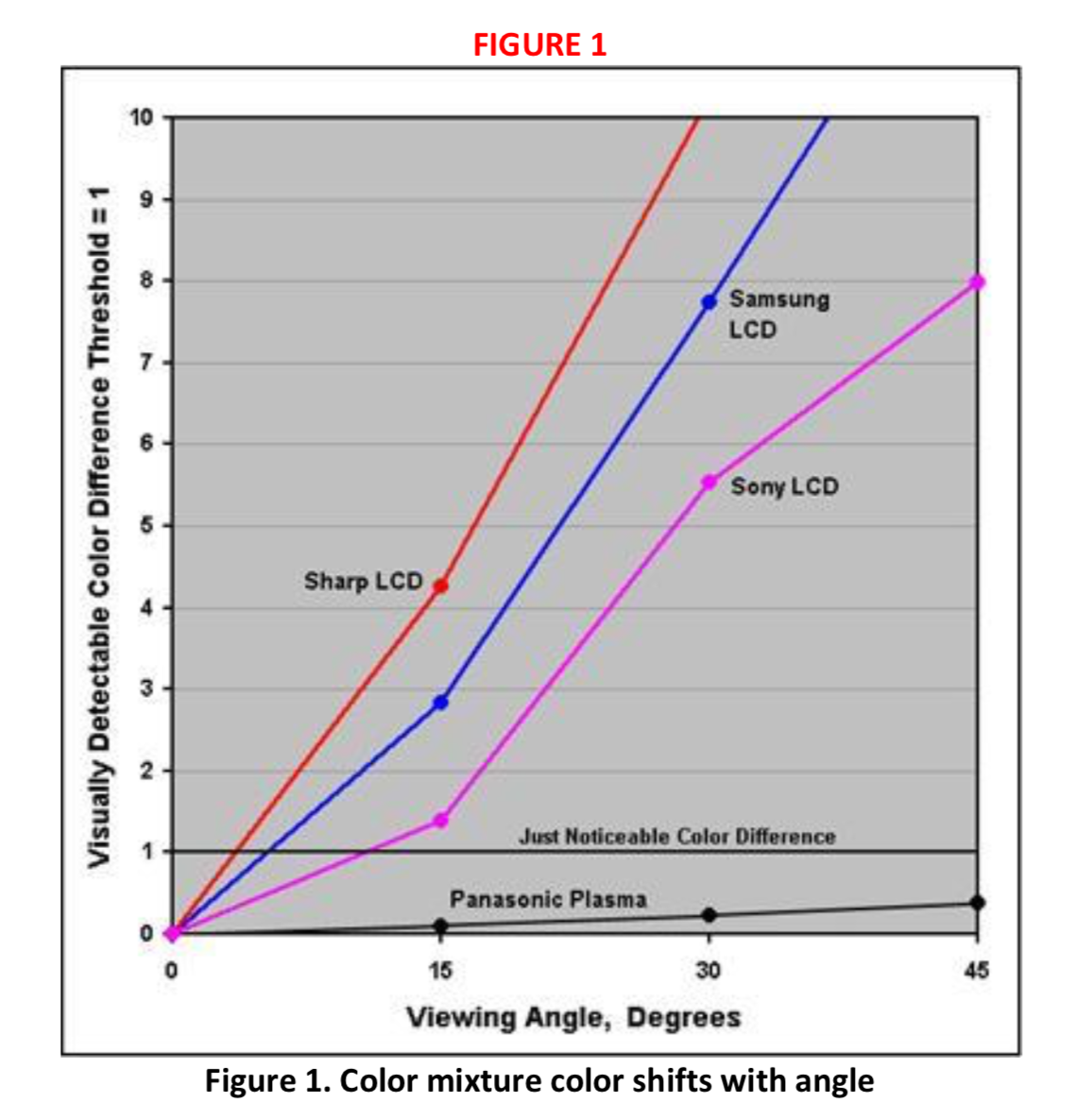 All of the LCD units have a noticeable color shift at less than ±15 degrees, while the Panasonic Plasma is visually indistinguishable from face on viewing well beyond ±45 degrees. This is true for both the measurements and the viewing tests. The significance of this is enormous, because it means that the “sweet spot” for seeing an accurate picture on an LCD HDTV is only one person wide, even for these top-of-the-line models, so essentially everyone looking at an LCD HDTV will see a picture with noticeably different coloration.

Third: unfortunately, it gets even worse for LCD HDTVs that have an Extended Color Gamut, such as the Sony and Samsung units, which show additional and much stronger Viewing Angle artifacts than LCDs with a standard HDTV color gamut, such as the Sharp unit. Right now there is essentially no commercially available content with an Extended Color Gamut, so this feature is just a marketing gimmick. But a gimmick with a significant penalty for all of the current content with a Standard Color Gamut. This is because the standard HDTV primary colors for these units must be generated as color mixtures of the native extended gamut primary colors, and those color mixtures then vary with viewing angle just like the other colors. As a result a much larger fraction of the HDTV color gamut shows a strong variation with angle. The Sharp unit does not have an extended color gamut and as a result performed much better with primary colors than both the Sony and Samsung units. Figure 2 repeats the measurements and analysis with angle for the pure Red and Green HDTV primary colors in order to examine the effect of Extended Color Gamuts. The Sharp LCD and Panasonic Plasma have only a small shift in primary color chromaticity with angle, while the Sony and Samsung units both show very large variations with angle. 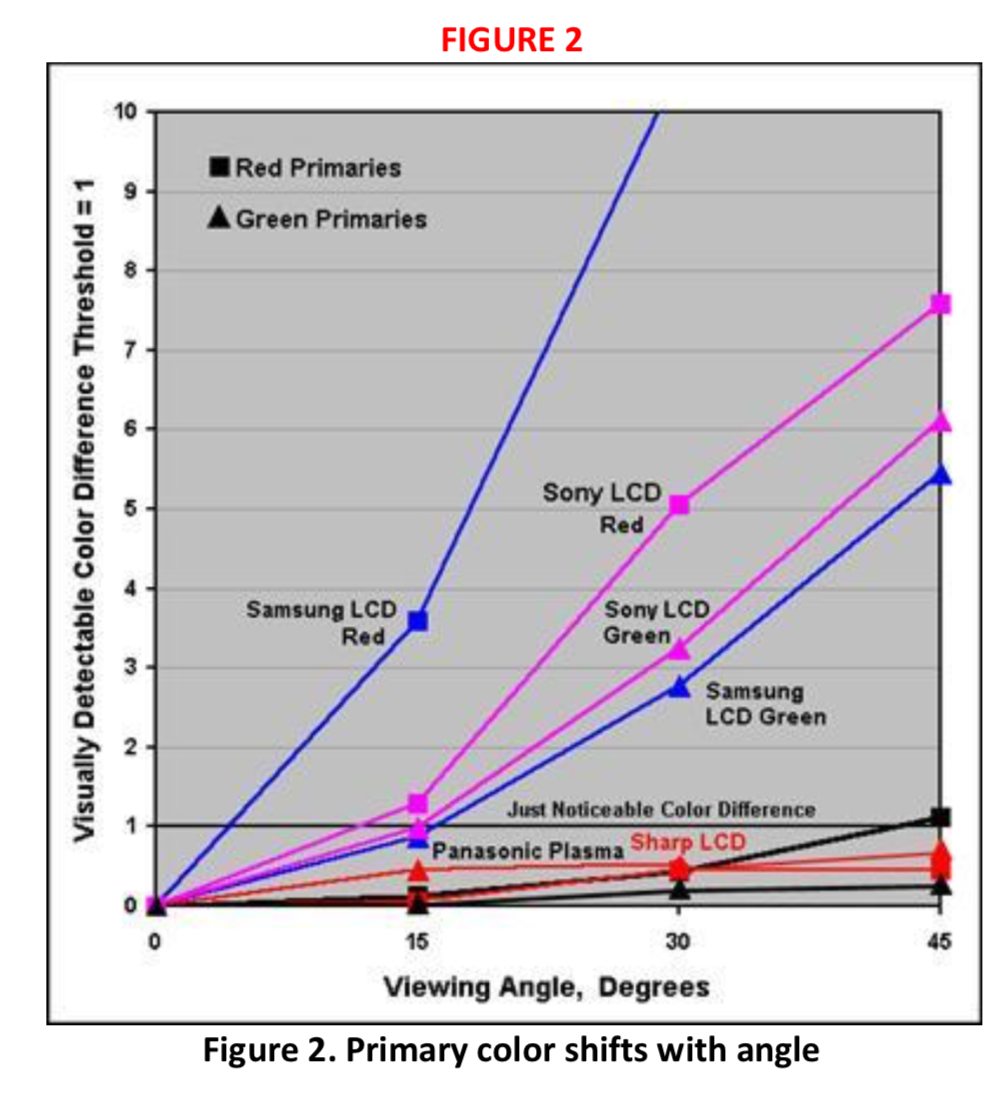 The best examples were the two units with the best picture quality: the Sony LCD and the Panasonic Plasma, which were set right next to one another. Their calibrations were both so close that it was frequently impossible to visually tell them apart. But that was true only when standing exactly dead center in front of the Sony unit. Shifting left or right by just one foot at an optimum viewing distance of 7 feet caused the Sony LCD unit to appear noticeably different from the Panasonic Plasma unit next to it, which delivered a consistent picture independent of viewing angle. This same effect also applies to vertical viewing positions and angles, so don’t even think about mounting your LCD HDTV above the fireplace! Make sure that the center of the TV is close to your normal viewing eye level.

The shocking conclusion is that only one person at a time can see accurate color reproduction on a direct-view LCD HDTV, even on top-of-the-line units from the top manufacturers. Even when viewers are seated close together side-by-side, each person will see a different picture with noticeably different coloration. On the other hand, Plasma displays deliver very close to true 180 degree (±90 degree) viewing, the same as traditional CRT monitors. There is very little change in brightness, contrast, hue, or color saturation over the entire 180 degree viewing area.

A rather interesting method that we used to demonstrate these effects was to have people walk past the lineup of HDTVs while simultaneously viewing and comparing static photographs on all the HDTVs, and then seeing how the units drifted in and out of color accuracy as they walked by each unit. Static photographs are crucial for evaluating picture quality and accuracy because they stay the same throughout the entire test, whereas live video is constantly changing so a detailed comparison and evaluation, even between two units, cannot be done using that method.

Figure 3 is a set of photographs taken at 0 and 45 degrees in front of the Panasonic Plasma and the Sony and Sharp LCD units. These screen photographs demonstrate the change in color with viewing angle for the test units. When viewed in person the differences were much more pronounced than they appear here in these printed thumbnails, which are affected by the Transfer Function of the camera and the printing process. 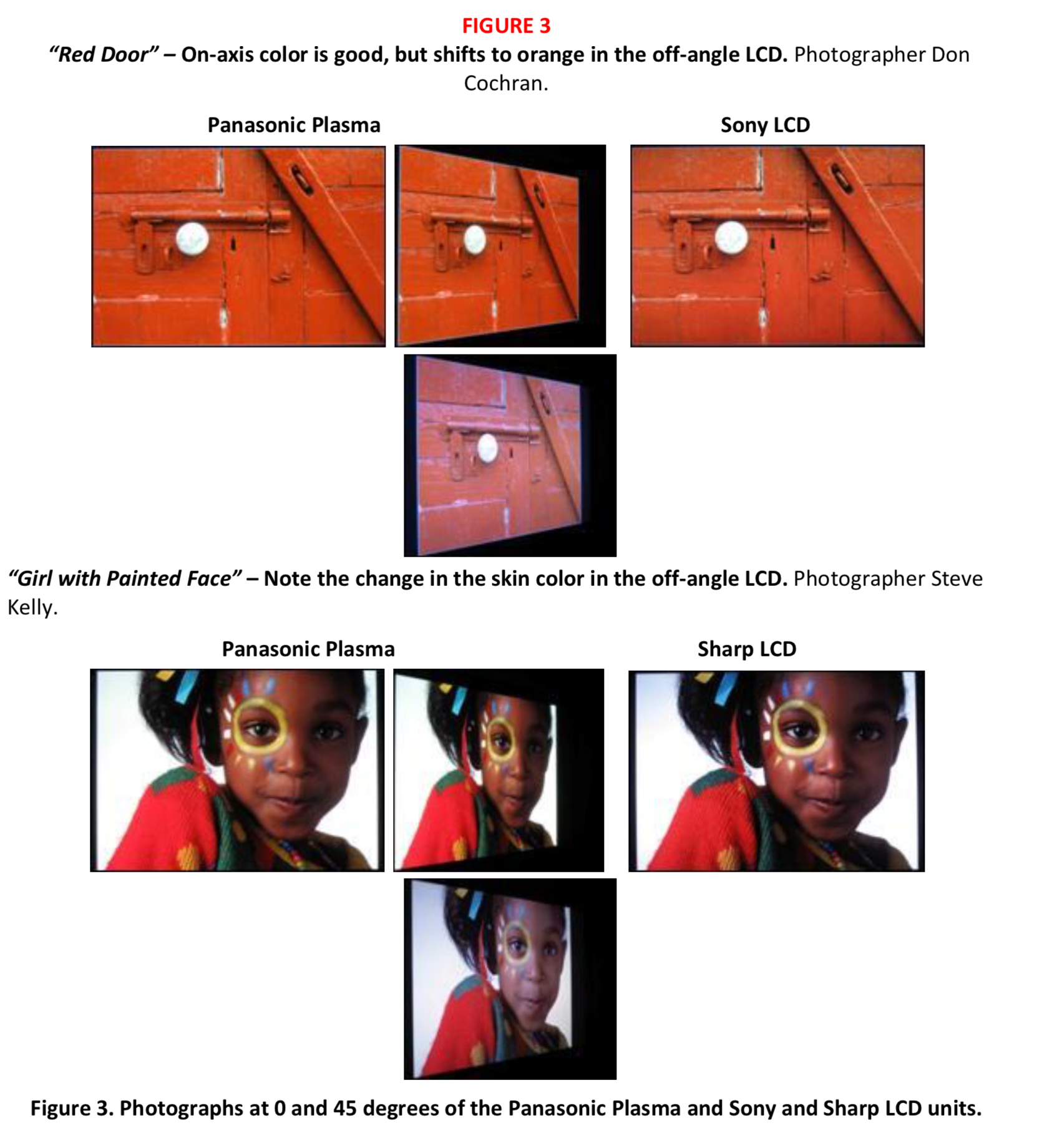