A Report on Dental Image Presentation

Dental radiographs and oral photographs are often both viewed on the same dental workstation monitor. The two types of images have vastly different technical characteristics and viewing intents, however.

This report examines the different monitor presentation requirements for the two types of dental images. We examine some of the technical characteristics of human vision and how that drives the requirements for scanned image presentation. The report gives an overview of pertinent radiology imaging standards. We also examine the progression of color photography and computer image color space conventions to the current state.

We then present the CalMAN Dental solution for dental monitor calibration. We present a quick, convenient method of creating multiple monitor calibration profiles to individually calibrate a monitor for accurate presentation of either grayscale radiographs or color photographs, as selected by the user to match the type of image currently being viewed.

In dental facilities, computer monitors are often used to view both grayscale radiographs and color photographs.

Due to differing characteristics between scanner- sourced radiographs and camera-sourced photographs, there are different performance requirements for displays used to accurately present these two types of images for viewing. Each type of image requires different monitor performance characteristics for optimum image presentation. Usually, however, a monitor’s native or aged performance doesn't meet the specifications for an accurate presentation of either type of image.

The contrast of darker areas of scanned images presented on electronic monitors must be enhanced to achieve perceptual linearity.

If the logarithmic image data produced by these scanning systems were to be displayed on a computer monitor with a logarithmic luminance response (A monitor’s luminance response is the relationship between its digital drive levels (e.g. 0-255) and the resulting screen luminance. ), the monitor would then produce image brightness levels that would be seen to have an approximately linear relationship to the scanned object densities.

There are two important factors to consider, however, when displaying radiographs on computer monitors. 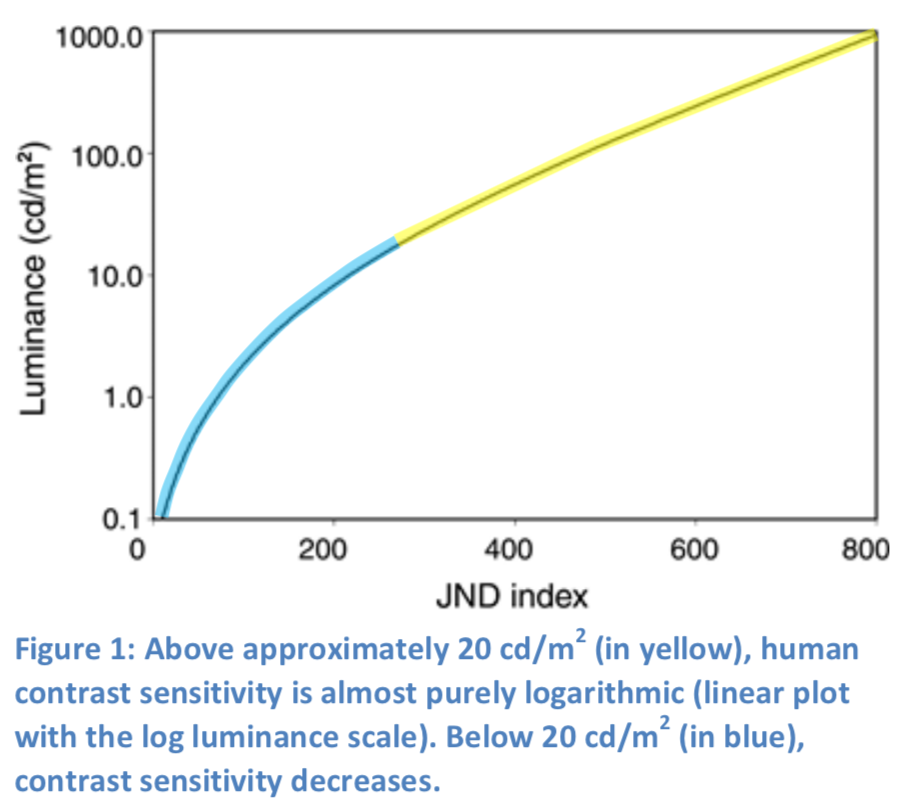 Thus, the contrast of darker areas of scanned images presented on electronic monitors must be enhanced to achieve perceptual linearity between scanned object densities and image brightness. (Dental films on traditional light boxes produce luminance levels that are mostly above 20 cd/m2 and don’t require this contrast enhancement.)

Inconsistent image presentation from one monitor to another causes inconsistent patient diagnoses and healthcare decisions.

Since a given radiograph may be viewed at different locations within and across dental facilities, on monitors with different native characteristics, images produced by the same image file can present completely different visual appearance, information, and characteristics on those different monitors. If uncorrected, this inconsistent image presentation from one monitor to another causes inconsistent patient diagnoses and healthcare decisions.

Accurate and consistent presentation of images across different monitors is the goal of radiology imaging standards.

The American College of Radiology (ACR) and the National Electrical Manufacturers Association (NEMA) formed a committee in 1984 that produced the Digital Imaging and Communications in Medicine (DICOM) standard.[1] Part 14 of the DICOM standard specifies a luminance response model for scanned images known as the Grayscale Standard Display Function (GSDF).

The intent was to cause radiographs to be displayed on any GSDF-conforming monitor with consistent contrast across the brightness range. The DICOM GSDF is the standard luminance response model for viewing scanned medical images. It is designed to produce approximately the same viewing experience on digital monitors that we would experience when viewing radiology film.

The DICOM GSDF matches a monitor’s luminance response to the nonlinear perceptual characteristics of our vision, based on Barten’s model of human contrast sensitivity[2,3]. At luminance levels below about 20 cd/m2, the DICOM GSDF departs from a near-logarithmic model to match the nonlinear perceptual characteristics of the human visual system (Figure 2). 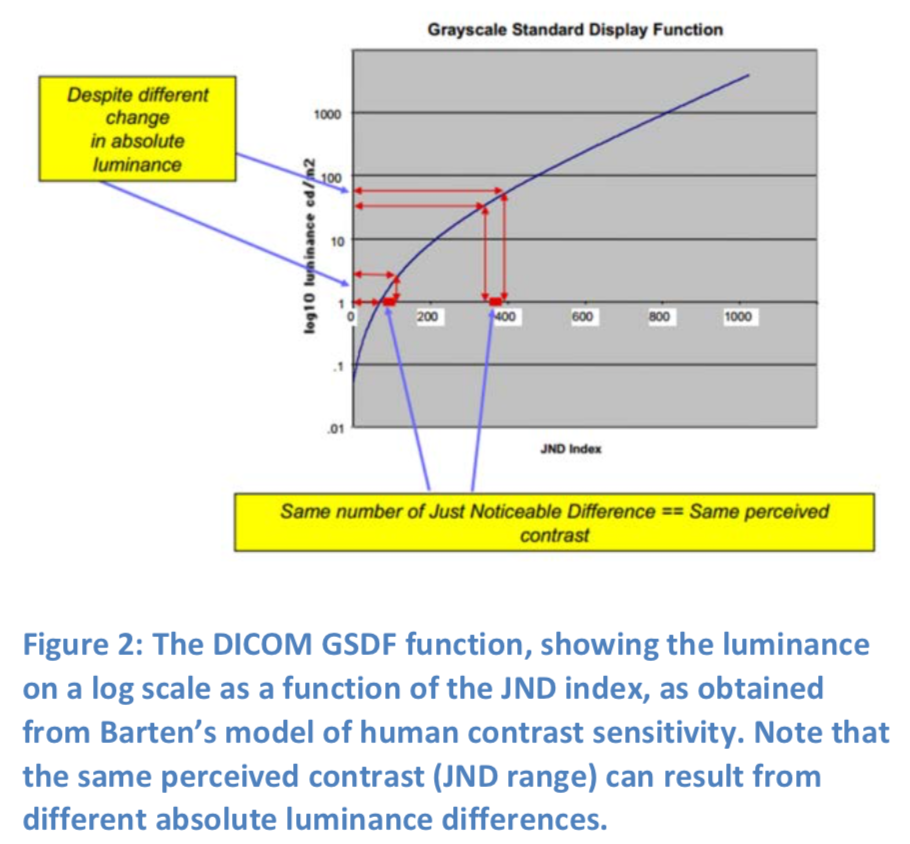 The DICOM Grayscale Standard Display Function (GSDF) ensures that each image level captured by an X-ray scanner is uniquely perceivable on a GSDF- conforming monitor.

Each equal step in image values should produce a perceptually equal brightness change. 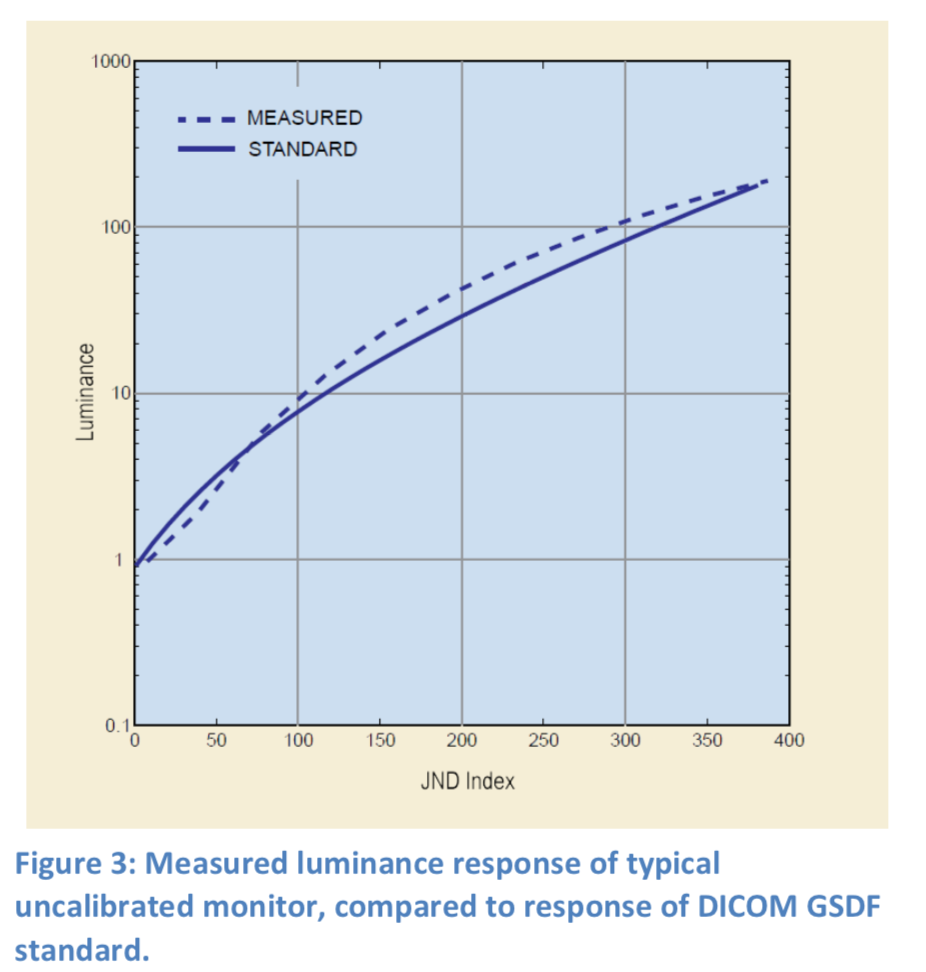 The DICOM standard defines the GSDF luminance response model for radiology monitors, while the American Association of Physicists in Medicine (AAPM) and the American College of Radiologists (ACR) specify monitor test procedures and acceptance criteria.

Task Group No. 18 of the AAPM published their On-Line Report No. 03 - Assessment of Display Performance for Medical Imaging Systems[4]. The intent of the report was “To provide standard guidelines to practicing medical physicists, engineers, researchers, and radiologists for the performance evaluation of electronic displays intended for medical use.”

The American College of Radiology (ACR), in collaboration with the American Association of Physicists in Medicine (AAPM) and the Society for Imaging Informatics in Medicine (SIIM), has published technical standards[5] that, in part, cover radiology diagnostic and clinical displays. 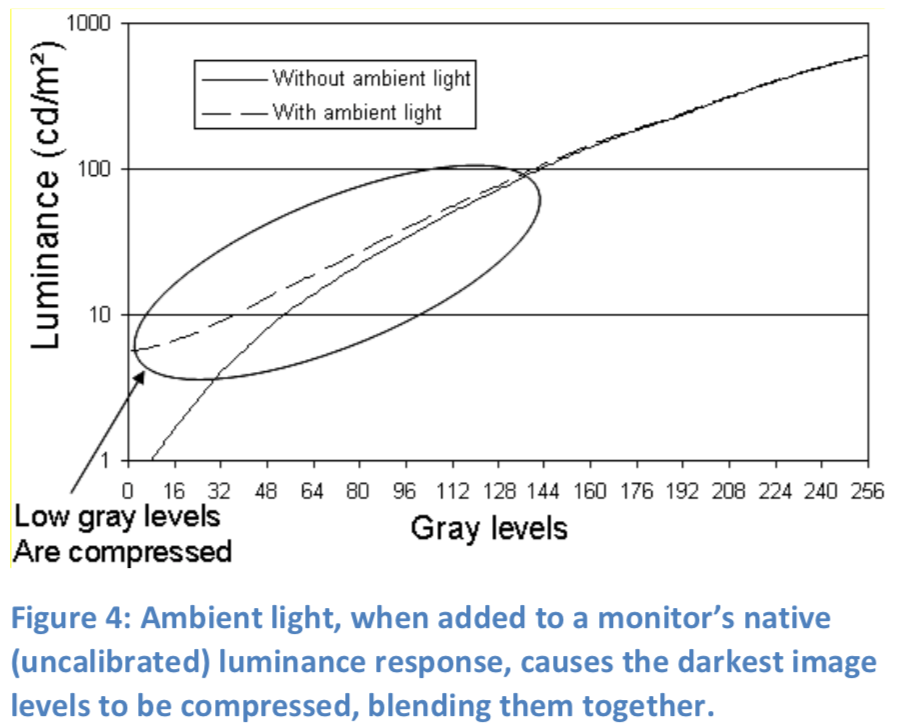 Most dental radiographs are viewed in a normal office environment, with at least a moderate level of ambient lighting. Without some image compensation for the ambient luminance, all contrast distinction will be lost in the darker image areas. The contrast difference between the darker gray levels of a radiograph will not be visible if the gray levels are not brighter than the reflected ambient luminance.

This means that a monitor’s native “black level” normally needs to be increased, to enable accurate perception of the darkest gray elements. Because digital monitors don’t usually have a black level control, the image black level needs to be increased before the graphics adapter applies the image values to the monitor as digital drive levels. This is done with a lookup table (LUT) of luminance calibration values applied to the workstation graphics adapter.

Before 1999, cameras, scanners, printers, and monitors, both individual models and collectively, all had different color spaces (methods of specifying or creating color). There was not a standard color space designated for creating, printing, and viewing color photography and web images.

In 1993, eight industry vendors established the International Color Consortium (ICC) to create a cross-platform color management system. The outcome of this cooperation was the ICC profile specification. ICC device profiles can be used to translate color data created on one device into another device's native color space.

Instead of attempting to manage the different color spaces of color input devices, color images, and color output devices, Hewlett-Packard Co. and Microsoft decided to create a single, standard color space that could be used by all color devices and images.

They created the sRGB color space, which was standardized in 1999 by the International Electrotechnical Commission (IEC) as IEC 61966-2- 1. The World Wide Web Consortium (W3C) adopted sRGB as the standard color space for all images on the internet. Microsoft made sRGB the default Windows color space, beginning with Windows 98, for all color images that do not have an embedded ICC profile.

This standard sRGB color space enables a simplified method of accurately handling color within a computer operating system and on the internet. sRGB is the world's default color space for digital images, cameras, scanners, printers, photo labs, monitors, and the internet. Use sRGB and you'll get great, saturated, and accurate color everywhere, all the time.

No photographer needs to do color management manually anymore. Color management, defaulted to sRGB, is now built into everything by designers who know what they're doing. Any attempt to outsmart them usually delivers worse results than just using
the sRGB color space for all input and output devices.

Some may be tempted to create photos in other color spaces, perhaps Adobe RGB for example, which can theoretically represent a wider range (gamut) of colors than sRGB. However, Adobe RGB squeezes colors into a smaller range (makes them duller) before recording them to an image file. Special software is then needed to expand the colors back to where they should be when opening the file. You cannot use Adobe RGB on the internet or for email or conventional photo lab printing. If you do, the colors will be lower saturation, dull looking. Using the sRGB color space throughout a photography process gives more consistent results than alternate wide color gamuts and gives the same, or brighter, colors.

All you need to worry about is having your monitor calibrated to accurately display sRGB images.

Dental facilities often use the same computer monitors to view both grayscale dental radiographs and oral color photographs. These two types of images require totally different monitor performance characteristics for optimum image presentation. Usually, however, a monitor’s native or aged performance doesn't meet the specifications for accurate presentation of either type of image.

So, how can a dental workstation monitor accurately present both grayscale radiographs and color photographs or web images?

A workstation user can select the monitor profile to match whether grayscale radiographs or color photographs are being viewed. The desired monitor profile can be selected by opening the calibration client icon that resides in the computer’s system tray (Figure 5). 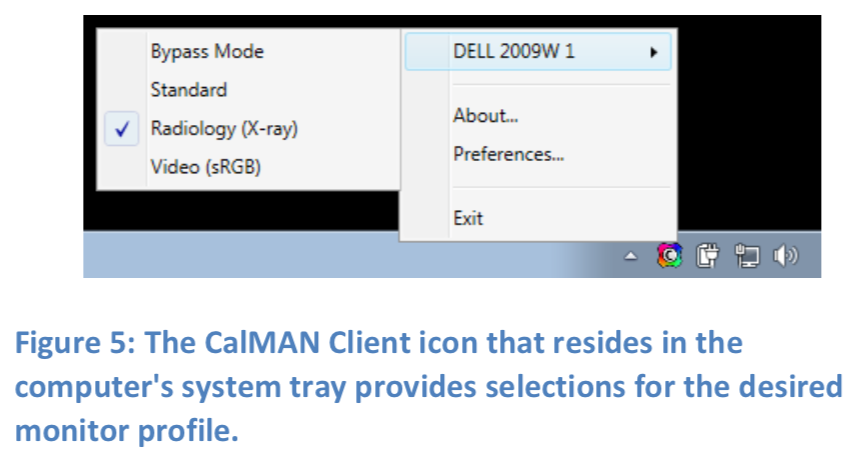 Calibrating a dental monitor with CalMAN Dental is a quick and easy process that takes less than ten minutes to complete. The Dental Display Calibration workflow in the CalMAN software prompts a user to properly position the light meter over the target window on the monitor screen (Figure 6). 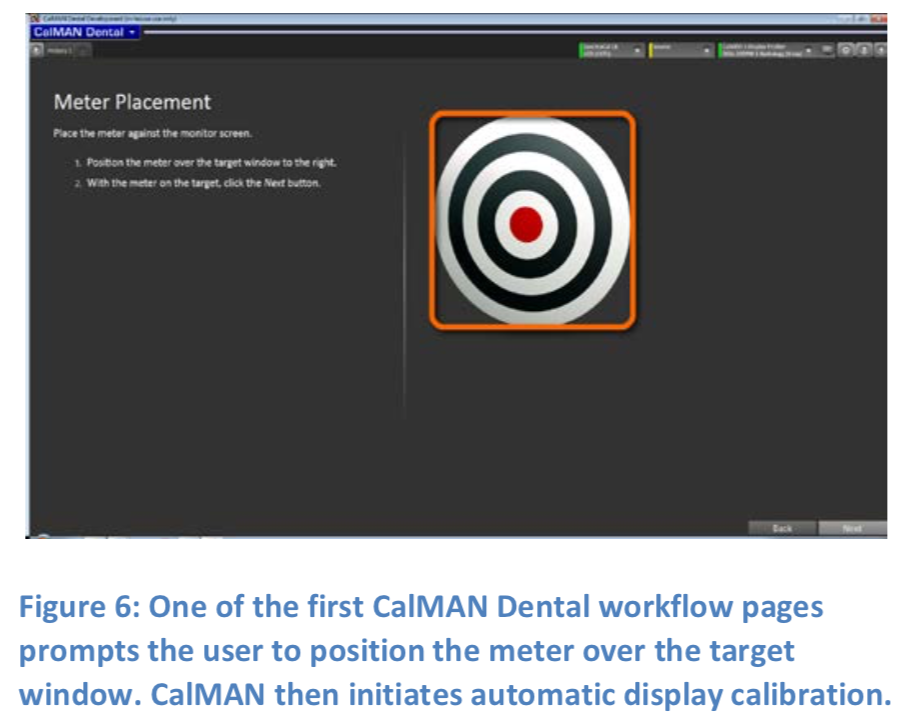 An outline of the workflow is viewable by opening the left hand CalMAN panel (Figure 7). 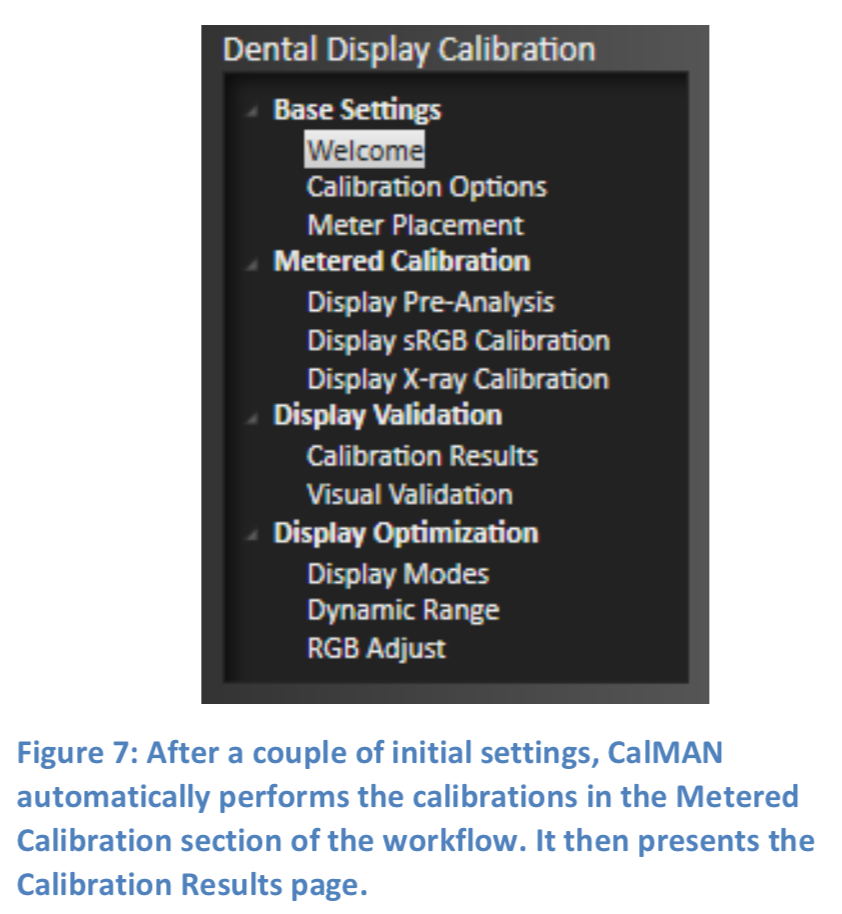 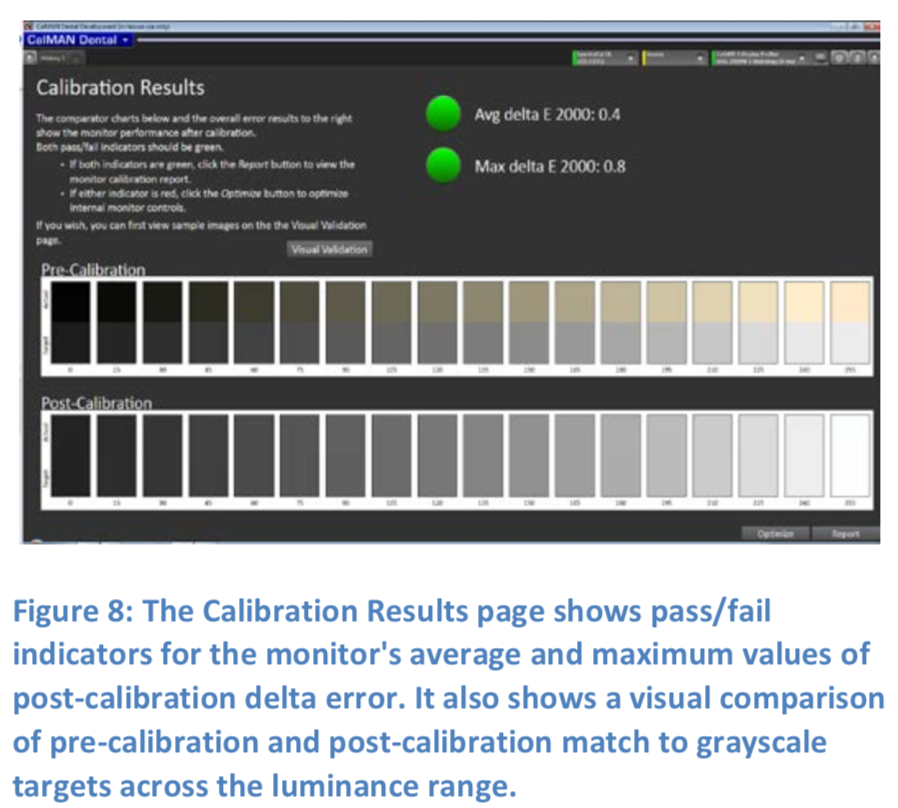 If the internal monitor controls were misadjusted to the point of causing failing calibration results, the user can click the Optimize button to step through the optional Display Optimization section of the workflow (Figure 7). After the monitor’s internal controls are optimized, the Metered Calibration section of the workflow is automatically repeated.

CalMAN Dental creates the calibration data for the Radiology (X-ray) profile by implementing industry standard DICOM, AAPM, and ACR radiology imaging guidelines. The luminance level of each part of an X-ray radiograph is corrected to conform to the DICOM Grayscale Standard Display Function (GSDF). This ensures that each image level captured by an X-ray scanner is perceivable as a different brightness level on the calibrated monitor.

CalMAN Dental creates the calibration data for the Video (sRGB) profile by implementing the IEC sRGB color space standard. The sRGB color space is designed to optimize monitors for typical home and office viewing conditions, rather than the darker environment typically used for commercial color editing.

Don't waste time calibrating anything other than the monitor; unlike monitors, today's cameras, scanners, and printers are well calibrated out-of-the-box to the sRGB standard. If you check white balance and exposure on the camera’s LCD and save the images as sRGB, the images will have accurate color, saturation, and contrast when viewed on the monitor calibrated with the CalMAN sRGB profile.

The grayscale radiographs and the color photographs that are commonly viewed on dental monitors present a challenge for accurate presentation of both types of images.

To realize the highest diagnostic quality from grayscale radiographs, each image level must be perceived as a different brightness level, as presented on a viewing monitor. CalMAN Dental achieves this by calibrating an X-ray monitor profile for accurate conformance to the DICOM GSDF luminance levels and applying ambient luminance compensation.

To realize the highest diagnostic quality from oral photographs, the sRGB color space must be used to present the standard sRGB images that are created by today’s color cameras. CalMAN Dental achieves
this by calibrating an sRGB monitor profile for accurate conformance to the IEC sRGB standard.

The X-ray and sRGB monitor profiles are user-selectable thru the CalMAN Client icon to precisely match the performance of the monitor to whichever type of image is currently being viewed.