A color model is a system of describing colors as three or four color values or components (i.e. RGB, XYZ, and CMYK). A color space is a specific implementation of a color model that defines a particular set of colors. There are many defined and device-specific color spaces that use each color model.

Human color perception cannot be fully defined by only two values, just as different geographic locations and the shape of the earth cannot be fully defined by a flat two-dimensional map, although flat maps are extremely useful. Different 3D color models and 3D color spaces are arbitrary methods that have been agreed upon to describe the three-dimensional aspect of human vision. Different 2D chromaticity diagrams (color maps) show two dimensions of a three-dimensional color space. Different types of flat maps and different types of flat chromaticity diagrams both serve different useful functions.

Human color vision is based on the three types of retinal energy detectors, called cones, which respond to different energy wavelengths corresponding to red, green, and blue light (the primary colors of light). The three color space values for a color represent how much each cone is stimulated by that perceived color. The three color values can be red, green, and blue values, directly representing the stimulus values of the three retinal cones (RGB 3D color model). The RGB color model relates directly to physical RGB devices, such as displays. Or, the three RGB color values can be transformed into a different set of three values (another 3D color model), to standardize or measure other color spaces. 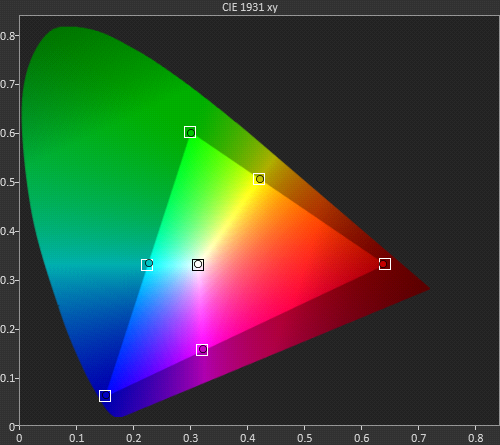 The CalMAN Color Gamut chart, which reproduces the CIE Chromaticity Diagram, shows a display’s measured primary and secondary colors and indicates the accuracy of those colors, compared to a reference standard (e.g. BT.709). All colors of light that a display produces are made up of some combination of the display’s Red, Green, and Blue primary colors, in varying proportions and intensities. Equal amounts of two primary colors, without the third primary, produces the secondary colors: Cyan, Magenta, and Yellow.

A display’s color gamut, the range of colors the display is able to reproduce, is graphically defined on the chromaticity diagram by a triangle that connects the display’s primary colors. Each square box is a color reference target – where the color should be on the diagram, according to the selected reference. Each colored dot indicates the display’s value for that color, according to the display measurements. The distance from the center white point indicates each color’s saturation, with zero saturation at the white point and target saturation in each square target box. Rotation around the center point indicates a change of hue, with the target hue in each square target box.

The original 1931 CIE xy chromaticity diagram quantifies the color of light independent of the intensity of light present, but it is not perceptually uniform. Equal distances on the diagram, in either the x or the y direction, do not represent color differences that are perceptually equal to human vision. In 1976 the CIE adopted an updated LUV color space and an associated u’v’ chromaticity diagram (usually indicated as simply uv), to address this lack of perceptual uniformity. The CIE 1976 LUV color space is called a Uniform Color Space (UCS) because it displays colors more uniformly according to human perception.

Figure 2: The area of each color region varies significantly, depending upon which CIE chromaticity diagram is selected (CIE 1931 xy on the left; CIE 1976 uv on the right).

The CIE also adopted a LAB color space in 1976, with a* and b* chromaticity parameters, but with no defined chromaticity diagram color regions. The CIELAB color space is based on the color-opponent theory of human vision, which theorizes that the mutually exclusive color qualities of red-green,yellow-blue, and white-black are due to neural processing of the retinal cone signals in a manner that fundamentally influences human color perception. The CIELAB L* lightness parameter closely correlates to perceived brightness.

When you are evaluating the results of standard display calibration, you may want to use the CIE 1931 xy chromaticity diagram for legacy comparison purposes. When you are analyzing a display’s 3D color space performance, or creating 3D calibration correction tables, you will probably want to use the CIE 1976 uv chromaticity diagram, for its more accurate representation of color difference perception.

In video displays, Y'CbCr values are transformed into R'G'B' values. The Y' luma component approximates the brightness information while the Cb and Cr chroma components approximate the color information. The relationship between Y' and R'G'B' values in the HDTV BT.709 color space is as follows:

Note: The ‘ prime symbols indicate that values are gamma encoded.

If a display reproduces a color either brighter or darker than the standard value, the color will appear, first of all, to be over or under saturated. The measured hue and saturation for each color is graphically indicated on the chromaticity diagram in the Color Gamut chart, but the chart doesn’t indicate luminance values. CalMAN provides a Gamut Luminance chart to indicate the luminance of each of a display’s primary and secondary color’s, relative to the reference luminance targets (Fig. 3). If the luminance of the primary and secondary colors are all correct, compared to the luminance of 100% white, the color bars on the Gamut Luminance chart will all be at the center target line. 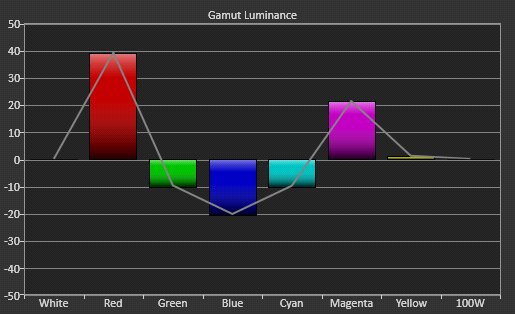 Figure3: The CalMAN Gamut Luminance chart indicates whether the luminance of each of the primary and secondary colors is above or below the standard value for the selected reference gamut system.